The TELCOMA VoLTE Call Flow Training and Certification course is designed to provide the technology to allow you to use VoLTE services in your business, whether you are an IT manager who wants to understand how VoLTE works and why it was developed, or a marketing professional who wants to learn how to market a service that has not yet been deployed but can increase customer satisfaction in several ways, or someone else who wants technical details about the mechanics of VoLTE.

Voice over LTE (VoLTE) is a method of transmitting voice traffic in a wireless network. It allows for higher quality calls, and diverse services and offers a defined transmission path for calls. VoLTE uses the LTE data channel that is used by mobile phones for internet services such as mobile broadband and email. It allows users to make calls from their mobile phone over a 4G network, allowing the call to be placed over broadband instead of the traditional circuit switching network. VoLTE is a mobile data service that works over the LTE network. It allows for phone calls to be made over the Internet instead of on a 3G or 4G connection. All you need to do is add the correct SIM card to your device and switch it on. The Voice over LTE (VoLTE) call flow is described below. As illustrated, the mobile station (MS) initiates a voice session by sending an INVITE message to the Evolved Packet Core (EPS) gateway. The INVITE message contains the IP address of the MS, which is called a P-CSCF address. Henceforth, the P-CSCF plays an important role in establishing a VoLTE call by invoking a number of proxy functions on behalf of the MS. A UA is an element involved in setting up media sessions between two UAs and transmitting media across networks.

The proxy function allows this transfer to be transparent to endpoints. VoLTE, also known as 4G LTE, is the next generation of cellular technology. It allows for calls to be made and received over a 4G LTE connection. This video describes how VoLTE works from both the device and carrier perspective, how it benefits customers by providing a higher voice quality with fewer dropped calls, and how you can implement it in your own product. Voice over LTE (VoLTE) is enhanced voice service for mobile communications. It is a packet-switched technology that provides higher voice quality and uses more data capacity than the older circuit-switched voice technology used in 2G, and 3G networks. Voice over LTE (VoLTE) is a telecommunication standard for the delivery of voice services using IP networks. It complements existing mobile networks and can be deployed on top of the LTE (Long Term Evolution) air interface for voice communications. VoLTE (Voice over LTE) is a relatively new technology that enables higher-quality voice calls on wireless networks. It uses the concept of circuit switch, which means the voice path between the handset and the cellular network has a dedicated channel for transmission. The voice traffic is digitized and transmitted by different streams over LTE and Wi-Fi. This enables users to enjoy better audio quality during VoLTE calls. With VoLTE, the call is established over a high-quality radio link of the LTE network, not the circuit-switched cellular network.

This delivers a better end-user experience and can reduce operating costs for carriers through lower interconnection costs as a result of increased call traffic on the LTE network. Voice over LTE (VoLTE) is a voice call service, similar to the traditional circuit-switched calls but all IP-based. It is standardized in 3GPP as well as GSMA specifications. By the end of 2014 more than 140 operators had commercially launched VoLTE services across 49 countries worldwide, with most of them being deployed in high-growth markets such as India, China, and South Korea. In 2016, commercial VoLTE deployments continued across new markets including Indonesia, the Philippines, and many more countries. Voice over LTE (VoLTE) is a standard for high-speed wireless communication for mobile phones and data terminals. It is an evolution of the GSM family of standards. The main difference between VoIP and VoLTE is that with VoIP calls are routed through the internet or other private networks while with VoLTE they are routed through the carrier's network, but then converted to IP packets using a protocol like RTP which allows them to be protected by existing IP security protocols.

VoLTE is designed to support voice calls while delivering the same high-quality service using a smaller amount of cellular bandwidth than earlier technologies such as 3G and LTE. With VoLTE, calls can be made to other VoLTE phones, or to Non-VoLTE phones via a fallback mechanism. VoLTE is a high-quality, low-data rate, application-independent interoperable standard for the transmission of voice and video data via Internet protocol (IP). It is based on the LTE standard and adds features such as call continuity, call forwarding, video calling, and SIM branding.

﻿VoLTE Call Flow is a set of feature tools that help you simulate and develop a VoLTE call in the most efficient way. Each tool will generate test scenarios specific to your needs:

VoLTE Call Flow demonstrates the core services delivered by the VoLTE network to ensure high quality end-to-end voice connectivity. This demonstration shows how a VoLTE call is initiated, established and handed over at various stages of the signaling process.

Volte Call Flow is a VoLTE service that helps you to enhance and improve your customer services.

A VoLTE call is a session between two parties using Voice over LTE (VoLTE) technology to transmit data. The VoLTE Call flow is the procedure followed by your phone and carrier when setting up a VoLTE call.

With VoLTE, the network and devices are able to intelligently manage media and ensure high quality, low latency and consistent User Experience for all VoLTE calls, regardless of what technology a customer uses

VoLTE call flow: An end to end VoLTE call starts with the UE searching for paging and sending a UECapabilityEnquiry message to the network provider. The latter then has two options as in regular LTE networks: either it sends an IMS Emergency Session Setup or an IMS Codec List Setup message back, or it forwards the message to the SIP Gateway which takes care of end user authentication (e.g. by adding a MGCF element). The SIP-ALG then forwards this information to the Softswitch which in turn informs the HSS and performs other necessary tasks within its own subsystems. The Softswitch then initiates the establishment of a new RTP session on top of ICE through a control plane request that is routed through new signaling channels, e.g. Direct Tunnel Protocol (DTEP), which are created at this point and used for requests such as PMIPv6 connectivity establishment with another node in IoT world including any roaming logic related with it.

This is a TELCOMA VoLTE Call Flow Training and Certification course. This course is designed to provide the technology to allow you to use VoLTE services in your business, whether you are an IT manager who wants to understand how VoLTE works and why it was developed, or a marketing professional who wants to learn how to market a service that has not yet been deployed but can increase customer satisfaction in several ways, or someone else who wants technical details about the mechanics of VoLTE.

VOLTE Call Flow is a practical, course that provides basic knowledge in VoLTE call flow. Through the various sections of this course, you will learn the basics of call setup and release using IMS standards and their implementation on different platforms (e.g., International Mobile Subscriber Identity, Media Access Control address recognition)

VoLTE is a new Voice over LTE (VoLTE) technology that offers outstanding audio quality, higher user capacity and lower network cost. This VoLTE Call Flow course is designed to provide participants with an understanding of the principles, architecture, services and components of the VoLTE infrastructure design and operation.

The VoLTE call flow is an integral part to understanding the basics of VoLTE technology. This course is designed to establish a fundamental understanding of how the technology works and demonstrate how it solves real business issues for customers, service providers and operators. Classroom education provides a foundation for future research and development work in this technology area by identifying opportunities for further innovation. The course will provide access to real world examples from participants.

This VoLTE session teaches you to make and receive calls using Voice over LTE (VoLTE) technology. You will learn about call signaling and call setup using VoWiFi/VoLTE and terminations. 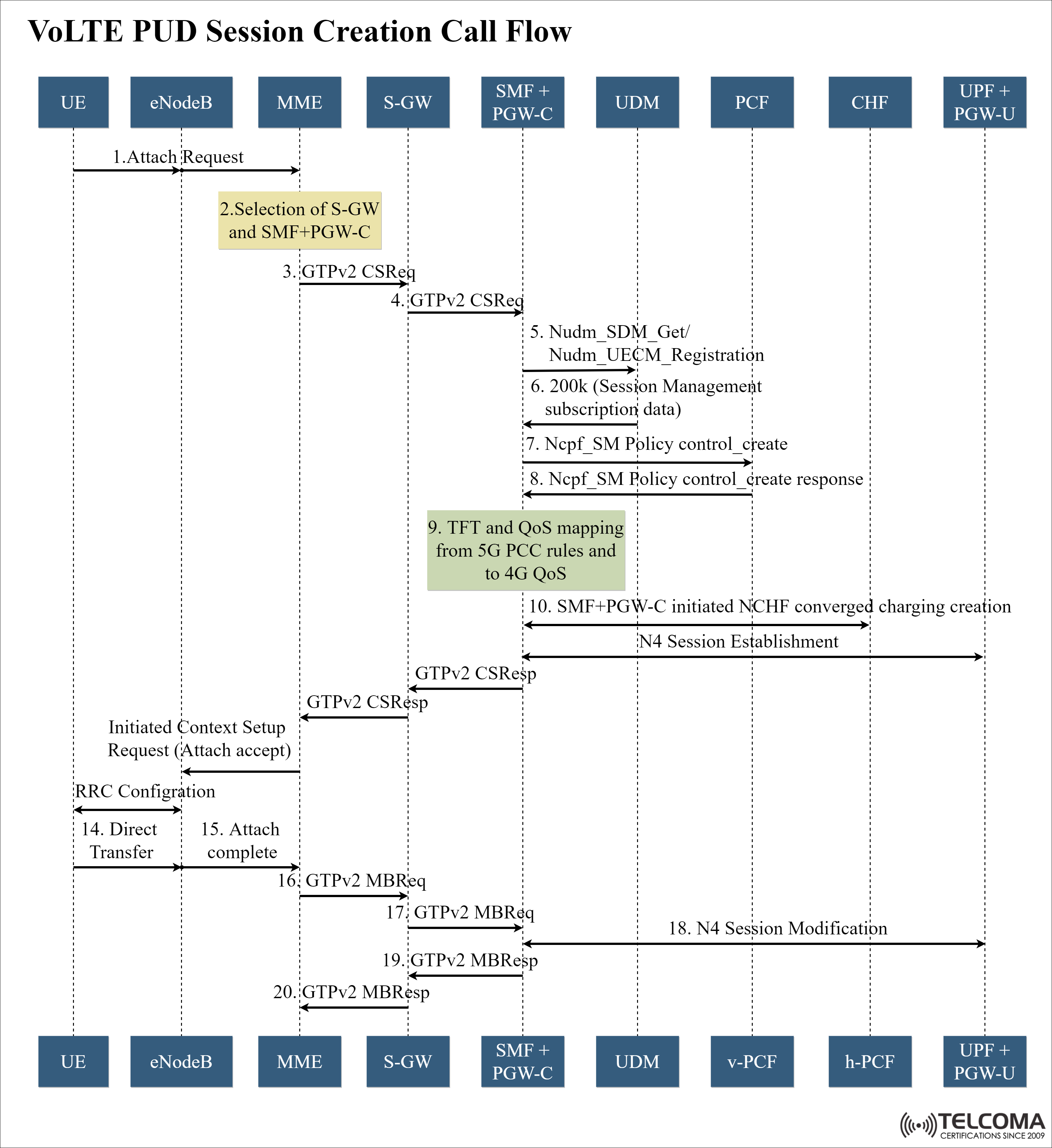 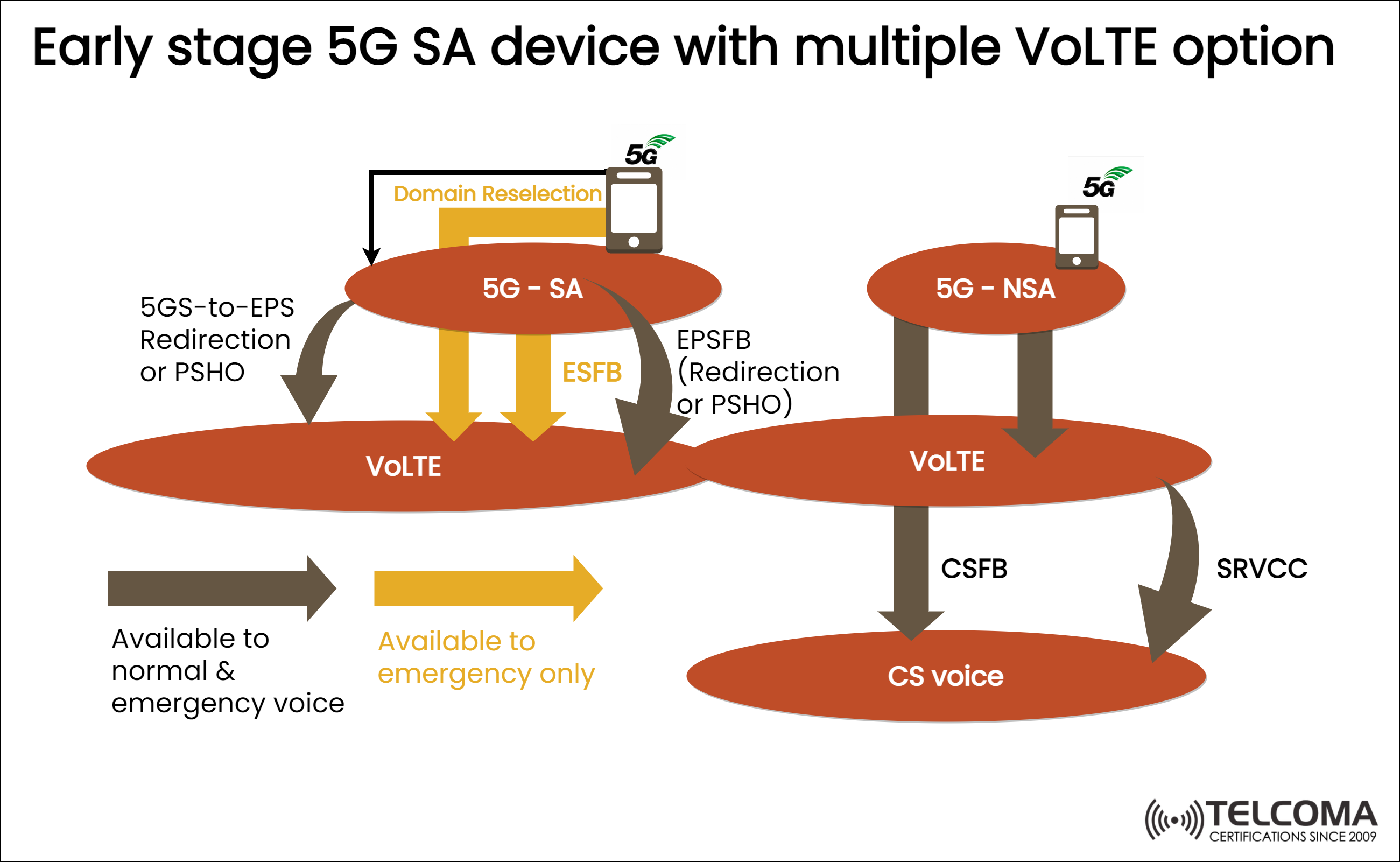