LTE-V2X is stated to support V2X communication for basic safety use cases. 5G-based V2X, or 5G V2X, NR V2X, is the second phase of the V2X stated in releases 15, 16, and in the future release that enables advanced use cases for data exchange but will not duplicate 4G-based V2X functionality.

In the past decade, the automotive industry is evolving toward connected and autonomous vehicles that offer many benefits, such as improved safety, less traffic congestion, less environmental impact, and lower capital expenditure. A key enabler for the evolution is the vehicle-to-everything (V2X) communication, which allows a vehicle to communicate with other vehicles, pedestrians, road-site equipment, and the Internet so that critical information can be shared to improve situation awareness and thus to avoid accidents. The goal of V2X is to guarantee driving safety in 100% no matter it is operated by a driver or navigated by self-driving, while at the same to maximizing convenience and comforts to drivers and passengers inside the vehicle. It is estimated that V2X technology could eliminate or mitigate the severity of up to 80 percent of non-impaired crashes, especially crashes at the intersections or while changing lanes.

Before deep-diving into technology, it is beneficial to clarify the terms used during the evolution of the technology. The emergence of the concepts in-vehicle communications has experienced many stages for many years, from V2V (Vehicle-to-Vehicle), to V2I (Vehicle-to-Infrastructure), V2N (Vehicle to-Network), V2P (Vehicle-to-Pedestrians), and finally to V2X (Vehicle-to-Everything). 802.11p-based V2V, or DSRC-based V2V, is the earliest technology dated back to 2009 that has promoted to use of IEEE 802.11p for V2V communications. As indicated by its name, DSRC, short for Dedicated Short Range Communication, can only work under a comparably limited range: about 300 meters. Though a number of standards and applications have been developed in the automotive industry since its first release, DSRC has its weakness in evolution path and deployment cost. By contrast, Cellular V2X, often referred to as C-V2X, is to compensate for the weakness of the DSRC-based V2V in large deployment, by leveraging the ubiquitous cellular LTE or 5G technologies. 4G-based V2X also called LTE V2X, or Rel14 C-V2X is the first standardized C-V2X communication based on LTE release 14. LTE-V2X is stated to support V2X communication for basic safety use cases. 5G-based V2X, or 5G V2X, NR V2X, is the second phase of the V2X stated in the releases 15, 16, and in the future release that enables advanced use cases for data exchange but will not duplicate 4G-based V2X functionality.

The use cases for V2X communication have also been evolving along with the maturity of the C-V2X technology. TR 22.285 in 3GPP Release 14 has identified up to 27 user cases that are possible in LTE, including V2V Emergency Stop Use Case, Automated Parking System, Wrong-way driving warn ing, V2X Road safety services via infrastructure, Waring to Pedestrian against Pedestrian Collision even when out of line sight (Fig. [1]).

In TR 22.286 in 3GPP Release 16, up to 30 enhancements of V2X use cases are added, with three driving mode classes are classified: autonomous driving, convoy, and platooning. Platooning (Fig. [2]) helps to improve safety since braking by the vehicles following the leading one is automatic and V2X communications delays are shorter than human reaction times. Moreover, wire-less communications allow enabling braking of all the platoon vehicles almost instantly instead of reacting one by one what prevents rear-end collisions. 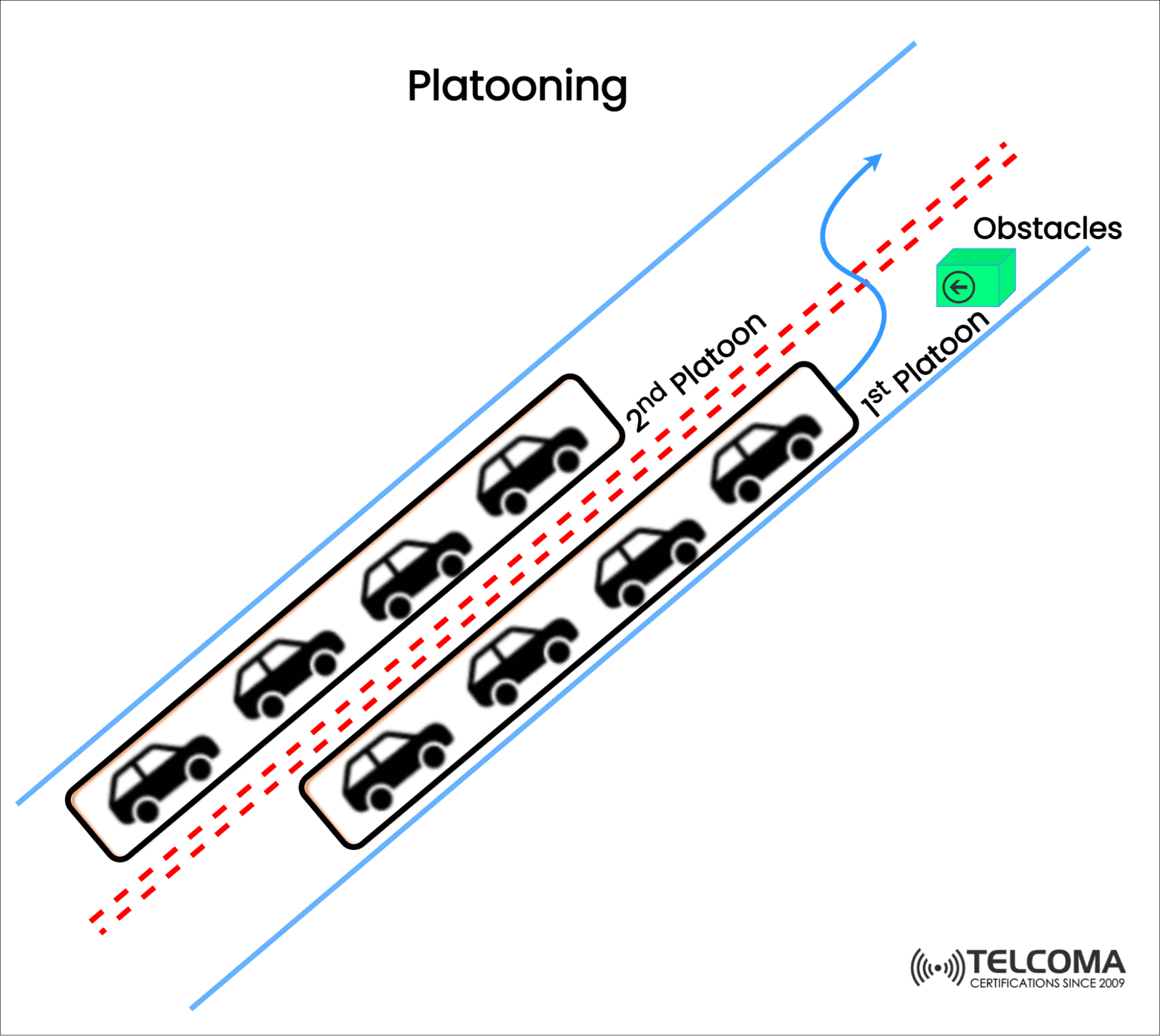 The 5GCAR project funded by the European Commission has also identified five use case classes and they are cooperative maneuver, cooperative perception, cooperative safety, autonomous navigation, and remote driving (Fig. [3]). Examples of these use case classes are sharing of driving trajectories during lane merge, exchanging of sensor data from e.g. radars, laser sensors among vehicles to see through obstacles. In cooperative safety, vulnerable pedestrians can be protected with the assistance of the network in exchanging information between all relevant users and infrastructure entities. In autonomous navigation, high definition local map can be acquired at the location of the vehicle for traffic flow optimization. In remote parking, the car can be controlled through wireless communication from outside the vehicle.

The key enablers in the radio interface for the 5G-based V2X include its scalable OFDMA numerology, flexible self-contained Time Division Duplex (TDD) sub-frame, massive Multiple-Input-Multiple-Output (mMIMO), diverse spectrum bands and bandwidths, and many others. These features together can deliver a radio interface with much lower latencies, enhanced reliability, higher spectral efficiency, and greater data throughput. Other V2X specific features include further optimization of the choices of the coding and the modulation scheme to meet the balance between low latency and high-reliability requirement for Ultra-Reliable Low Latency (URLLC) service in fast time-varying channels, beam-based broadcast, predictor antenna, sidelink assisted cellular communication and full-duplex. Especially in a platoon where a group of vehicles is located behind one another, vehicles can have distributed transceivers at different parts of the car body, so they can easily realize the full-duplex transmission, i.e. transmit and receive simultaneously at the same frequency. 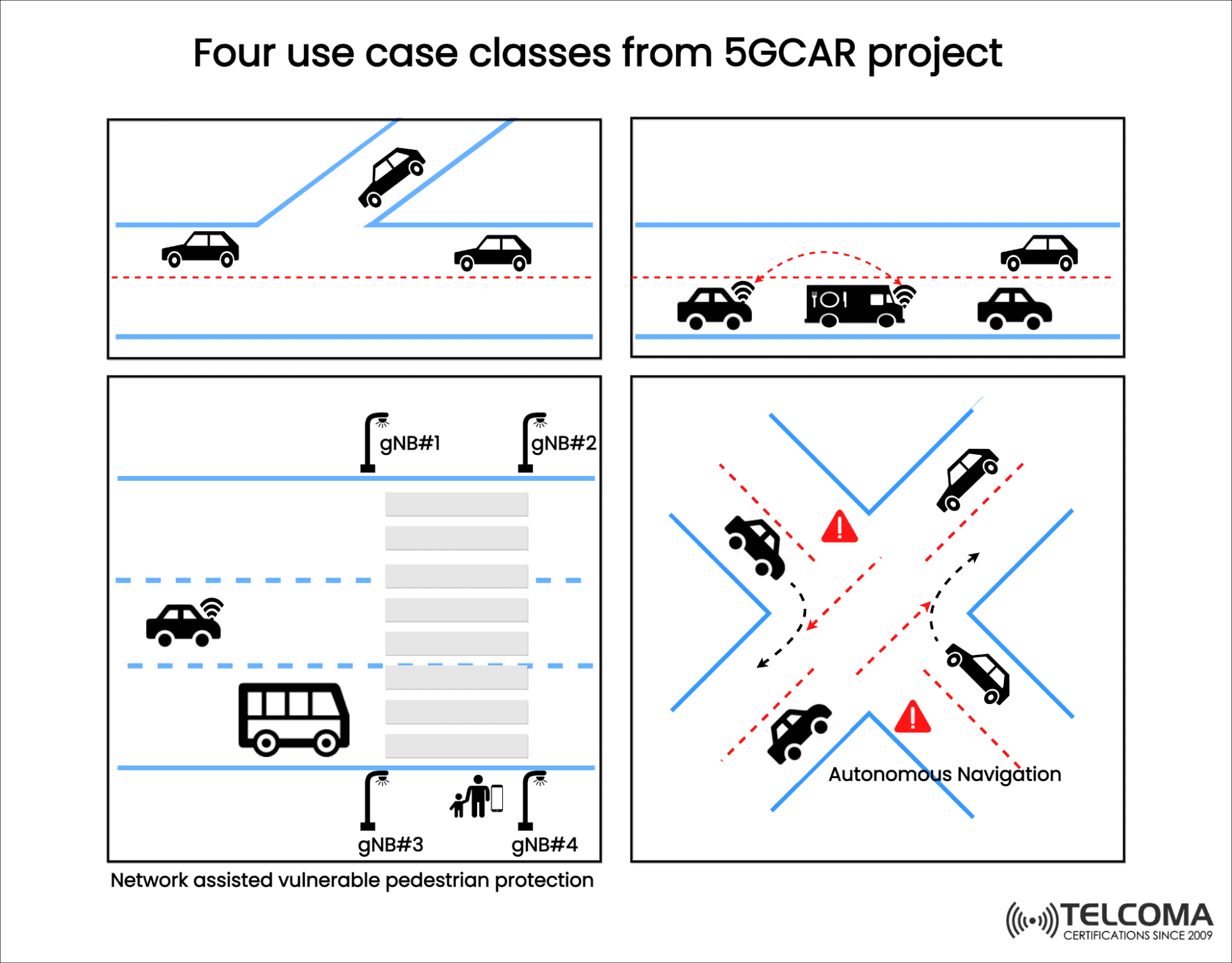 In the architecture level, 5G system introduce several technologies such as NFV/Software Defined Network, Control-User Plane Separation, MEC, net work slicing, automation and development and operations. The most illustrious features are network slicing and virtualization, in which network operators define different types of services and allocate dynamic proper resources by configuring different virtual networks. The resources in each virtual network can be adapted based on traffic conditions. For instance, autonomous driving would require an URLLC network slice to detect any road hazard and trigger an emergency message for the cars driving nearby to prevent an accident. At the same time, some personal mobility services would require either an eMBB slice for streaming video, such as an HD movie for passengers.

In conclusion, 5GAA has recently conducted a study in relation to the spectrum needs of use cases for intelligent transport systems (ITS) and advanced driving as implemented by C-V2X technologies. It is expected to re-quire 60MHz or more spectrum in 5.9GHz for V2V/I/P communications. And it is also noted that, the choice of which C-V2X technology, either LTE-V2X or NR-V2X, should be market-led, like in any emerging sector.