Turing back to the technology at hand, Open RAN is made possible through standardized open network interfaces, defined in 3GPP, O-RAN Alliance, IEEE, and other SDOs and industry fora.

When it comes to Open RAN (O-RAN), it is worthwhile to spend some time on reviewing the history of telecommunication market before coming to the details of the underneath technology. Date back to October 2009 when Rajeev Suri was appointed as the CEO of NSN (later Nokia), he had predicted that the global telecommunications equipment market could only have two or three major players left in playing the game after a few years. Everyone was skeptical about the prediction at that time. The number of the major market players at the beginning of 2010 was much more than 3: Motorola, Alcatel-Lucent from the USA, Nokia-Siemens and Ericsson from the Europe, and Huawei, ZTE from China. Amazingly the prediction became true. In July, 2010, NSN bought Motorola’s wireless network business for $1.2B; in July, 2013, Nokia agreed to buy Siemens’ 50% stake in their joint venture for $2.2B; in April, 2015, Nokia agreed to combined with Alcatel-Lucent for a price of $16.5B. After the com bination, the remaining market players were Nokia, Ericsson from Europe, and Huawei, ZTE from China. However, in the next a few years Huawei had continued to consolidate its maker leader position with an increasing market share globally. No one would have doubted that, even there would be another merge or combination in future, Huawei and ZTE from China would still cer tainly grow their market shares against Nokia and Ericsson. However, we are wrong and this trend has been reverted because, the America government has jumped in and the O-RAN is born.

In the welcome remarks at the FCC forum on 5G open radio access network on Sep 14, 2020, FCC chairman Ajit V. Pai had stated that, the 5G technolo gies would be embedded in almost every aspect of the society and economy – from business to homes, hospitals to transportation networks, manufactur ing to the power grid. However, carriers in the USA building out 5G networks rightfully had been always worrying that Huawei equipment could expose them to security risk. In addition to these security issues, carriers in the world might be concerned by a relatively consolidated marketplace. Technological innova tion had opened a new path to address these concerns. That technology was, Open Radio Access Networks, or Open RANs. Open RANs could transform 5G network architecture, costs, and security.

In another remark from FCC Commissioner Geoffrey Starks, he also pointed out that, American leadership in telecom network hardware market unfortu nately disappeared over time. American telecom carriers were eventually left without a reasonable domestic option. However, Open RAN networks might be part of the solution. FCC commissioners were advocating for the devel opment and use of software-enabled, virtualized 5G infrastructure to replace suspect equipment, because, America had long been a technology leader in software and wireless technology. Growing America capability to make secure infrastructure made sense from both a security and an economic standpoint. In a word, the birth of O-RAN is the outcome of the ‘America First’ policy. 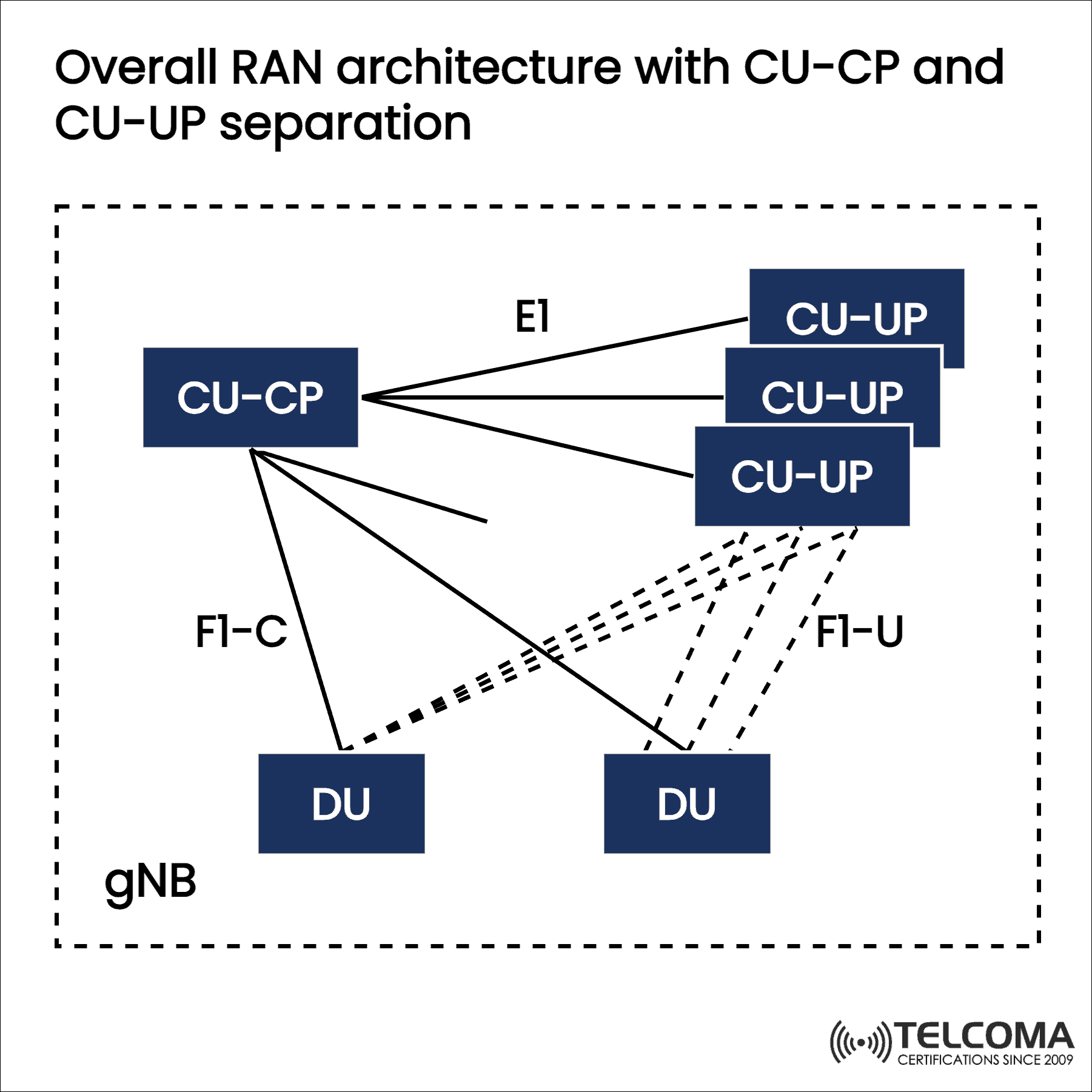 Turing back to the technology at hand, Open RAN is made possible through standardized open network interfaces, defined in 3GPP, O-RAN Alliance, IEEE, and other SDOs and industry fora. During the 5G study in Release-14, 3GPP have considered multiple split variants, illustrated by the Fig. [1]. After extensive discussions, the option 2 and the option 7 are the consensus in the NR-RAN split architecture in TR 38.801. In option 2, RRC, PDCP are in the central unit (CU), while RLC, MAC, physical layer and RF are in the distributed unit (DU). However, further study in TR 38.806 has consolidated the split of CU into CU-CP (Control Plane) and CU-UP (User Plane) (Fig [2], where CU-CP is hosting the RRC and the control-plane part of the PDCP protocol, and CU-UP is hosting the SDAP and the user plane part of the PDCP protocol. The split of the CU also makes it possible to support more flexible separation between CU-CP, CU-DP and DU, as shown in Fig. [3]. 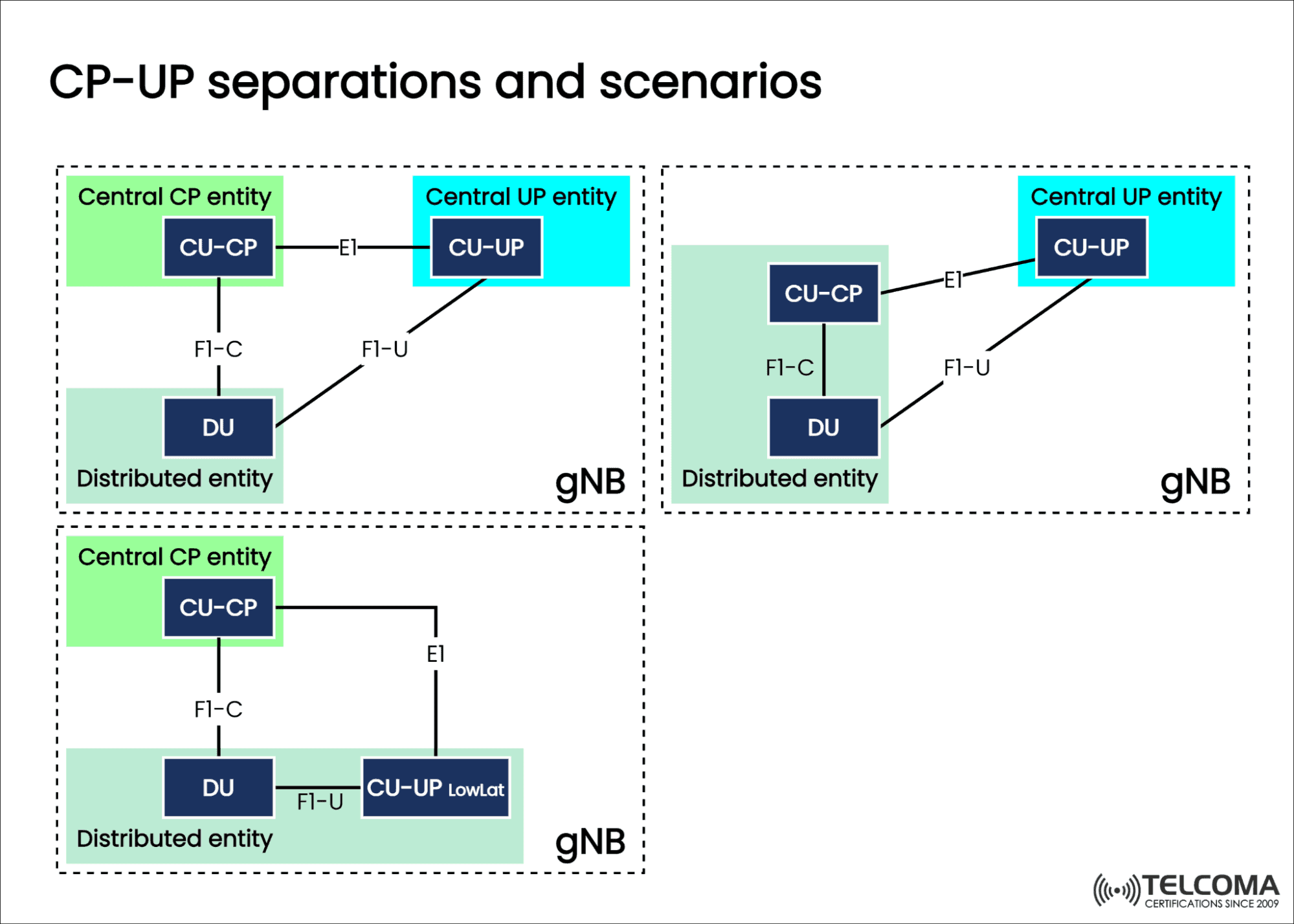 In the option 7, study on CU-DU low layer split in NR in TR 38.816 has defined several functions distributions and their compatibility for a possible implementation of NR L1 processing chain. Such a low layer split (lls) results in lls-CU and lls-DU. The lls-CU is hosting layers above PHY (i.e., MAC, RLC, PDCP, SDAP and RRC) and also some higher parts of PHY layer depending on the layer functional split option, and it controls the operation of one or more lls-DU. lls-DU is hosting all or some lower parts of PHY layer depending on the lower layer functional split option, and it is partly controlled by lls-CU. The functional split in the PHY is shown in Fig. [4]. 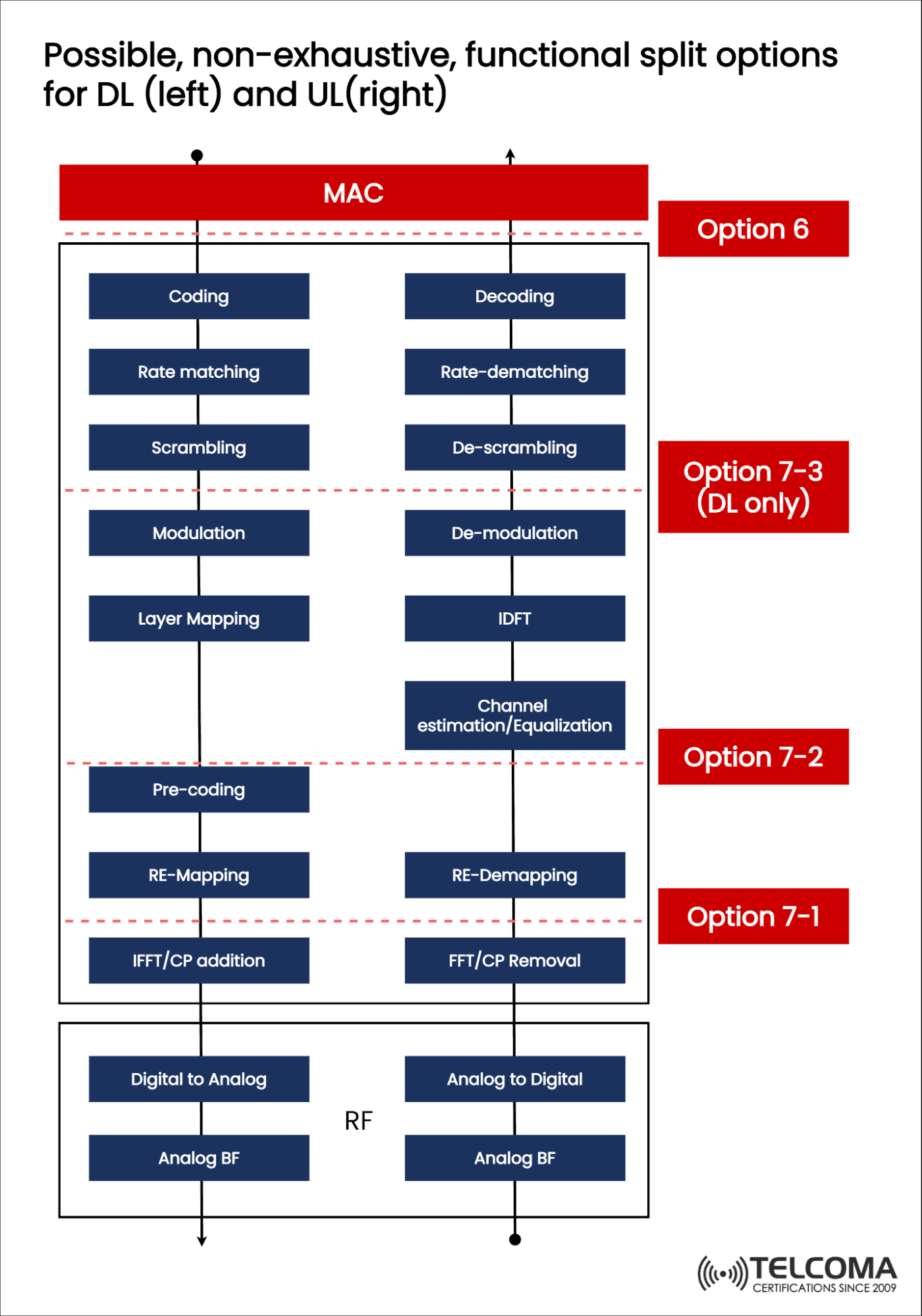 After the low layer split, the fronthaul are the links between lls-CU and lls-DU. The connections among multiple lls-CU and lls-DU will become a fron thaul network. There is no one-size-fit-all solution in the fronthaul network, as it depends on the data rate, latency requirement for different functional split options and different deployments and configurations in MIMO, cell band width etc. Many fronthaul connections use the Common Public Radio Inter face (CPRI) connection protocol, which has been used mainly for point-to point transport for macro base stations. Because of the increase in the scale of 5G, more efficient fronthaul interfaces are needed, such as evolved Common Public Radio Interface (eCPRI).

As a conclusion, the standardization of the O-RAN is ready, and the advent of Open RAN has been breaking the wireless networks into components and moving away from end-to-end product lines, so that overall security can be improved. The success of O-RAN will depend on how the game players in the market, including network operators, equipment manufacturers and software providers, to sift the best ideas and ultimately determine which approaches work best.