5G NR (New Radio) is a unified and more capable air interface with several diversified services, different spectrum, and deployment methods. This new Air interface is designed in such a way that it would be able to meet all the requirements of 5G technology which demands 10 times decrease in end-to-end latency, ten times increase in experienced throughput, three times increase in spectral efficiency, hundred times increase in traffic capacity and network efficiency and 10-time increase in connection density of the networks.

5G is the fifth generation of wireless communications and NR is the new radio interface which is designed for the fifth generation. It is a new radio interface which has new radio access technologies for faster data transmission and also to meet all the requirements of the new generation. 5G NR (New Radio) is a unified and more capable air interface with several diversified services, different spectrum, and deployment methods. This new Air interface is designed in such a way that it would be able to meet all the requirements of 5G technology which demands 10 times decrease in end-to-end latency, ten times increase in experienced throughput, three times increase in spectral efficiency, hundred times increase in traffic capacity and network efficiency and 10-time increase in connection density of the networks.  The Air interface of 4G technology is not able to comply with the above-stated requirements, so for 5G there is a requirement to design a new air interface and it is named New Radio (NR). NR is unified in nature and it is more capable than the previous generations. Diversified services supported by NR include eMBB (enhanced Mobile Broadband), URLLC (ultra-reliable low latency communications ), and mMTC (massive Machine type communications). 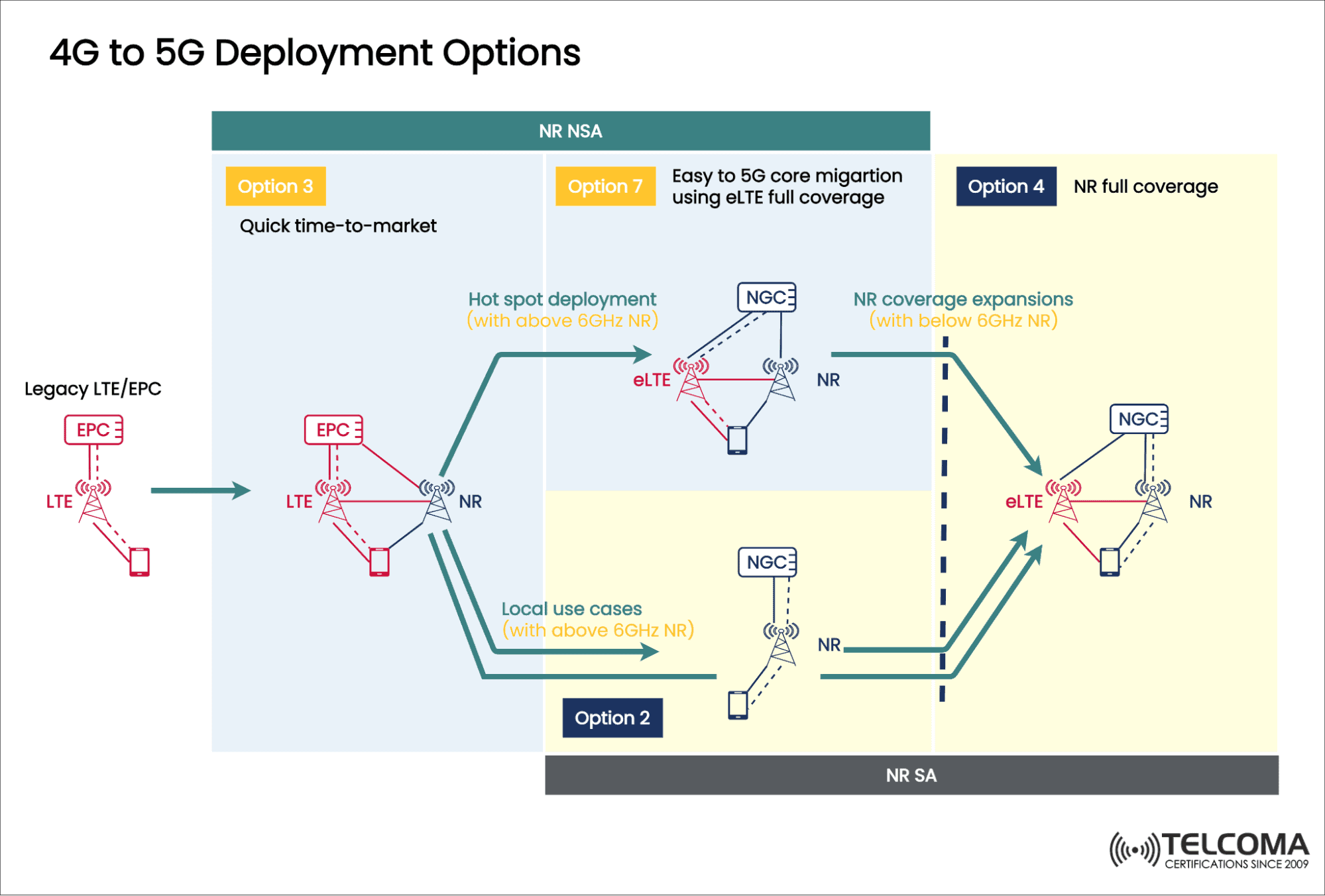 3GPP has standardized a set of different 5G deployment solutions for NSA (Non-Standalone) mode and SA (Standalone) mode. Both NSA and SA deployment approaches will support all 5G services. Initial 5G NR launches depend on the existing 4G infrastructure and this mode is called NSA where the new network has to depend upon the existing infrastructure. SA is a fully deployed mode with no dependence on the previous generation, it has its core network as 5GC. In the Non-Standalone mode of 5G NR that refers to an option of 5G NR deployment that depends on the control plane of an existing LTE network for all the control plane functions, while the 5G NR is completely focused on the data plane. The deployment’s standalone mode refers to using 5G cells for both the signaling and the data transfer. It includes the new 5G core instead of relying on the LTE infrastructure. DSS (Dynamic spectrum sharing) is a technique where carriers may dynamically share between 4G LTE and 5G NR. The terminals need to be compatible with DSS. 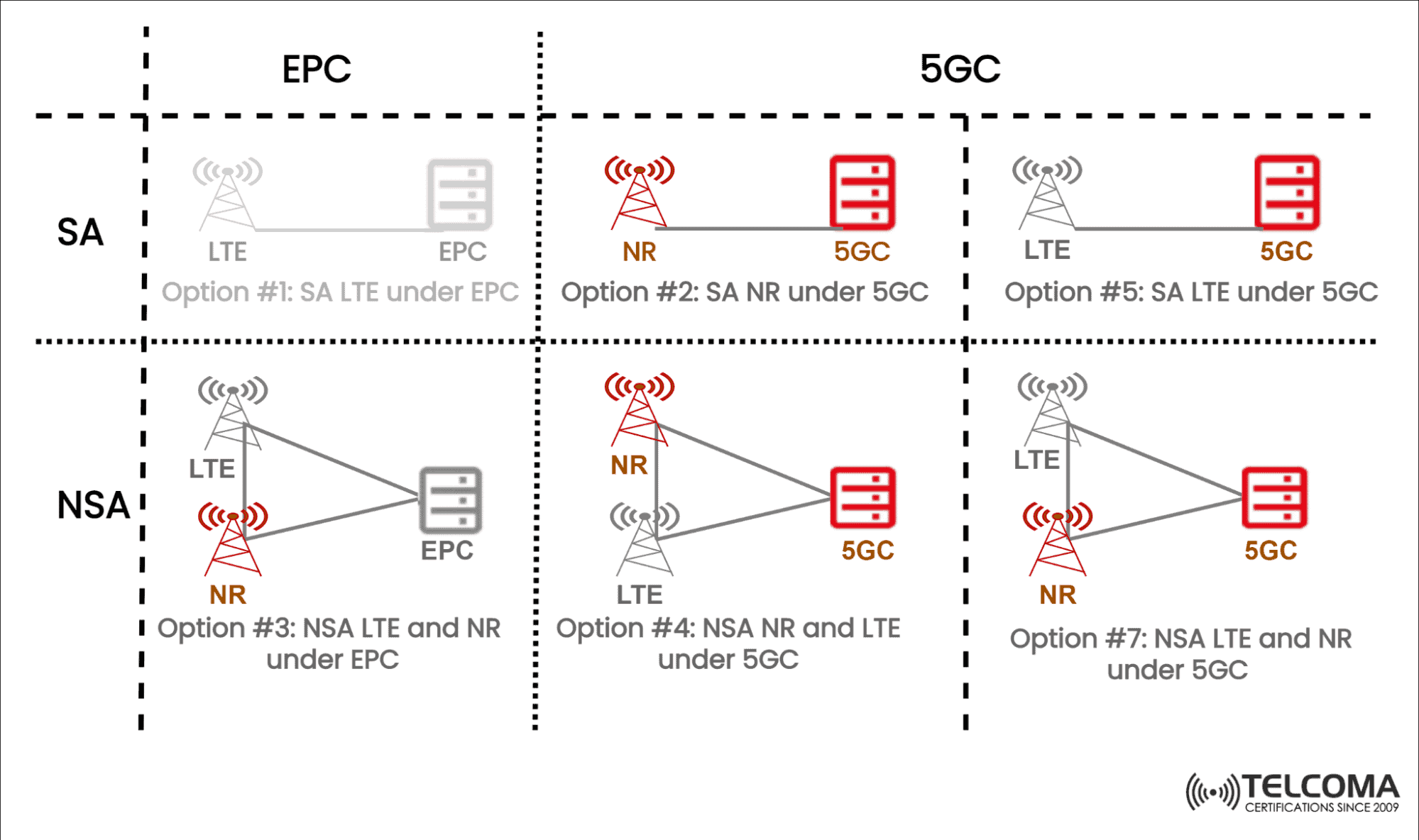 In this case, the new radio base stations are connected via a 4G network. 4G EPC (Evolved Packet Core) is required for the control plane communications and mobility management procedures. The benefit of 5G NSA is a short time to market, faster and more efficient mobile broadband. NSA deployment options are option 3: NSA LTE and NR under EPC, option 4: NSA NR and LTE under 5GC, and option 7: NSA LTE and NR under 5GC.

The new radio and the 5G Core are independent of the LTE technology with this. Voice services will also be supported in this and there is a handover between 5G and other generations for both voice and data services. Benefits of this type of core include enhanced end-user experience, simplified operations, and service agility, improved network capabilities, and future-proof network architecture. SA deployment options are option 1: SA LTE under EPC, option 2: SA NR under 5GC, and option 5: SA LTE under 5GC.

The enhanced Mobile broadband service may be accommodated on any 5G Architecture options with similar total capacity and end-user experience. The theoretical data throughput will be higher when using NSA approaches with deployment options 3,4 and 7. Mid and high-band NR would not offer significant coverage when used to support SA option 2. Option 3 enables a faster time to market since the core network can be upgraded later. Due to 5G NR, users can experience better throughput. However, with this increased traffic, EPC may become a bottleneck. From this NSA option 3, the operator can migrate to NSA option 7 or SA option 5. With both options like option 7 and option 5, 5G core can enable all 5G services. 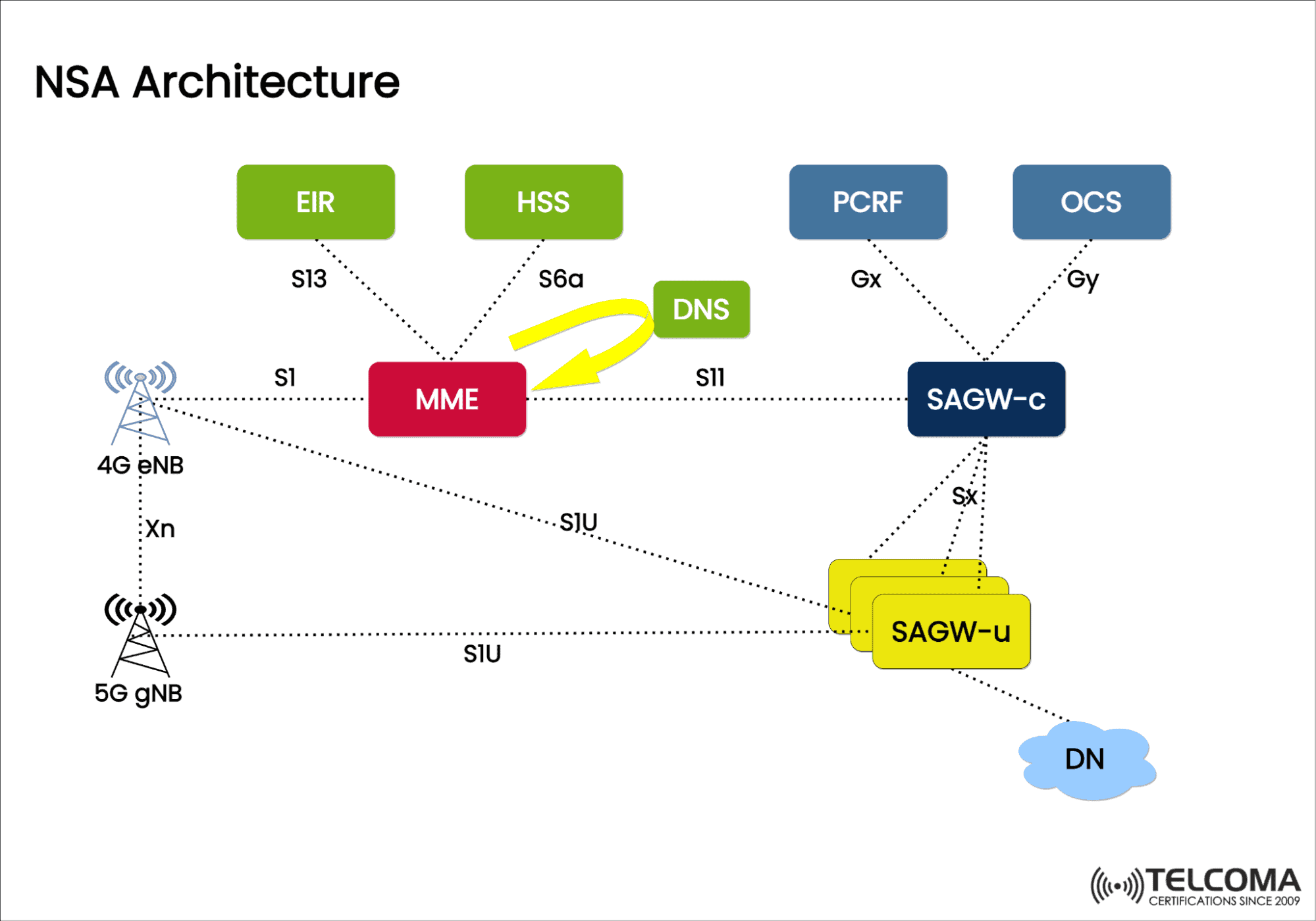 Many early 5G networks will start with option 3 NSA. The primary advantage of this solution is that 4G EPC network architecture may be used, only up-gradation is required. Option 2 SA will be an option for the early  5G deployment by service providers. Deployment of option 2 involves the introduction of a new 5G core network functions and 5G NR base stations and will avoid the need to rebuild the EPC core and minimizes changes to LTE eNB. Initial option 2 deployments using TDD bands above 3GHz is mainly considered for a dense urban area to provide capacity relief.  The solution will be able to support native 5G services offered by the new 5G core network with inter-RAT handover used to maintain the connection when moving out of the 5G coverage area.

In this, LTE cell and NR cells provide similar coverage e.g if LTE and NR are operating on the same frequency band.

LTE eNB is a master node

gNB is a master node:

In this network topology, both LTE and NR radio access networks are connected to their respective core networks independently. There is mobility across RAT.

When NR is fully capable of operating in SA mode, its functionality could be extended to WLAN for Wi-Fi offloading, etc.