A new generation of wireless communications is considered as the fourth stage of the revolution of the industry. This enables connectivity between different objects and machines throughout the world. In 1950’s and 1960’s, there was deployment of the first commercial analog mobile communication system with low penetration. The first generation mobile cellular standards were deployed in 1981 which are called analog standards. Then in 1991, the 2G Global system for mobile communications (GSM) network was deployed internationally which allows digital transmission and switching technology. This network provides improvement in quality of voice and capacity of network. It also provides supplementary services as Short message service (SMS) for sending the text information.

General packet radio services (GPRS) is an evolution of 2G known as 2.5G that provides packet-switched data services. There was further evolution of GSM in enhanced data rates for global evolution (EDGE).

CDMA was adopted by the European Telecommunications Standards Institute (ETSI) in two variants i.e. Wideband Code Division Multiple Access (WCDMA) and Time Division CDMA (TD-CDMA) and called it a Universal Mobile Telecommunication System (UMTS) which was the major 3G mobile communication system. The new specifications were developed by 3rd generation partnership project (3GPP) which is named as 3.5G. After that there were number of releases that signifies the evolution of 3G to 4G LTE.

In 2015, 4G networks were installed practically which are currently being deployed throughout the globe that provides data rated in 100Mbps for high mobility users and 1 Gbps for stationary users. But the demand for data rates of the order of many Gbps has been increasing due to increase in video traffic and ultra-high definition video streaming. This results in the introduction of 5G that will provide wireless networks to match data rates at very low delays. It is expected that 5G networks will be deployed around 2020. 5G expectations include; massive MIMO, full duplexing, device-to-device communications, caching, and mm-Wave communications. The system concept on integration of building blocks of advanced technology is the most decisive factor for the success of 5G. Only the evolution of current networks is not sufficient to meet the challenging requirements, but the revolution in both radio access network and the core network are needed. New physical layer technologies will be deployed in the radio access network such as massive multiple-input multiple-output (MIMO), non-orthogonal multiple access (NOMA), Full duplex (FD) communication, millimeter wave (mm Wave) communication, device-2-device (D2D) communication, and visible light communication (VLC). Following are the usage scenarios for IMT for 2020:

Enhanced Mobile Broadband: the volume of mobile data-traffic has been increased due to growth in the number of smartphones and other data-consuming devices coupled with enhanced multimedia applications. Around 2020, the delivery capacity of the networks needs to be increased to 100-1000 times due to increase in data traffic.

Massive machine-type communications: The interest in machine-to-machine communication and Internet of Things (IOT) will be increased in the coming years. Wireless networks will connect and manage billions of everyday objects. So, the major challenge of 5G network is to integrate human and machine-type traffic.

Ultra‐reliable and low‐latency communications: the performance metrics such as peak rate, coverage, spectral efficiency, and latency, will be enhanced in the 5G system to provide improved quality of service (QoS).

In particular, 5G will have:

To enhance the spectrum and energy efficiency of 5G networks, the cloud radio access network has emerged which is cost-efficient. There is a decoupling of radio functionality and baseband signal processing in C-RAN. In C-RAN, pool of baseband unit (BBU) placed in a cloud-based data center and a small cell comprises of a large number of remote radio heads (RRHs) which are having a low-cost. There are number of advantages of C-RAN architecture:

The radio access network must be redesigned to achieve the vision of 5G. So, the

are following key properties of UCN:

Challenges of CRAN towards 5G

There are two aspects of C-RAN i.e. the fronthaul (FH) issue and virtualization for

cloudification. A link between a BBU and an RRU is FH link. The common public

interfaces of FH. To connect BBU pool with remote RRUs, fibers are used in the

C-RAN with centralization. The number of fibers needed depends on the size of the

centralization scale. Realization of the cloudification feature is another challenge of

C-RAN. Virtualization technology is one of the keys to this goal. There is a need to

optimize and customize the virtualization technology and commercial off-the-shelf

The past four generations of wireless systems have one of the most important value offerings which is called security. The end-to-end security of newer generations of wireless systems must be improved. There will be increase in the use of mobile broadband for Internet access and cloud services and this will increase the vulnerability to attacks and the cost of damage caused. Large amounts of IoT data will be transmitted by 5G. Data or information-fusion may be used to extract sensitive knowledge. Hence, to prevent unlawful entry, connectivity to an Internet-connected household entry must be carefully audited. To provide the integrity and authenticity of the messages, appropriate security functions must be used.

Autonomous driving of vehicles can be enabled using autonomous vehicle control. This may bring various benefits such as avoid accidents by providing better traffic safety, stress reduction and drivers will concentrate on other productive activities. Very low latency and high reliability will be provided for vehicle control signalling by installing vehicle-to-infrastructure, vehicle-to-vehicle, vehicle-to-people and vehicle-to-sensors communication on the roadside.

To get rescued and survive in an emergency situation, the user should have a reliable network. This is needed in the case when some part of network has been damaged in disaster. Sometimes the damaged network is provided with temporary rescue nodes. Relaying functionality may be given to user devices to support other devices so that they can reach the operational network devices. Emergency communication has two main requirements i.e. high availability and energy efficiency.

To support life-critical applications cell automation has been used that consists of devices in assembly line and control units having high reliability and low latency.

It becomes sufficient to provide high data rates in the high mobility trains that will become the major challenge for 5G.

Many smarter urban inhabitant perspectives bring smart cities into reality. In coming years, people will be connected with their surrounding environments as they go from one place to another. To provide personalized, context and location-aware services, the smartness to life has been enabled by the connectivity.

Virtual reality is the ability of users to interact with others such as conferences, meetings, gaming and playing music. People will perform complicated tasks located remotely using virtual reality.

A live view of a physical, real-world environment is called augmented reality in which computer‐generated sensory input augments the elements.

In future, there will be a drastic change in the way of communicating within social communities and individual groups. A 3D camera and intelligent image recognition technologies are consisted in a mobile phone along with different types of sensors that will capture the surroundings and provide context‐aware and location‐based information. In coming years, implicit communication will be used based on pre‐defined profiles without pressing any keys.

The main aim of 5G is to provide high data-rate, and more uniform experience quality as compared to LTE due to rapid increase in trends towards richer content and cloud services. There is a target of improvement upto 10-folds in peak data-rates.

The user plane latency in LTE is around 10 msec. Core-network delay components are included in the end-to-end user-plane latency. By reducing the latency related to processing delays, TTI duration, HARQ delays, and transport and core network, the end-to-end latency can be reduced.

The requirement for control plane latency in LTE is 100 msec. Idle-to-connected and dormant-to-active latency are two classifications of control-plane latency.

The mobile operators will offer a greater range of services and every user is provided with a mobile smart life and to achieve this they have to expand their business in 2020 and beyond. There will be a need for more diversified cloud services by operators. Along with voice and data services, various new added‐value cloud services will be created by collaborating network and mobile terminals such as real‐time interactive services, data storage and processing, and others. For this connectivity to large number of devices will be provided. Moreover, in highly dense areas also, 5G will have to support all the services. It is believed that the number of simultaneously connected users will increase to 100-fold and 5G will have to achieve that target. 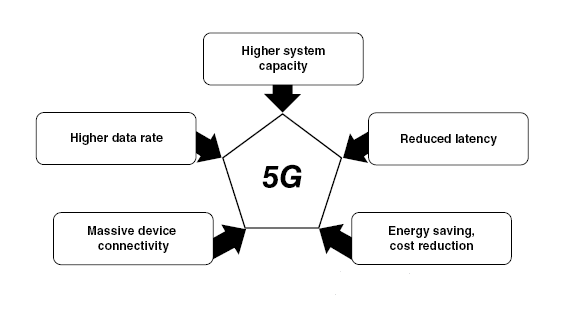 The first phase of 5G specifications in Release-15 will be completed by March 2019, to accommodate early commercial deployment.

The second phase in Release-16 will be completed by March 2020, for submission to the ITU as a candidate IMT-2020 technology.

TELCOMA has been providing fanatical services to the Telecommunications Industry since 2009. We provide world class training and certification solutions in 5G, 4G LTE, 3G, 2G, WiMax, IOT, Cloud and many more. Do check our courses here

TELCOMA 5G Training and 5G Certifications are the most sought certifications in Telecom Industry and help you to secure your career.